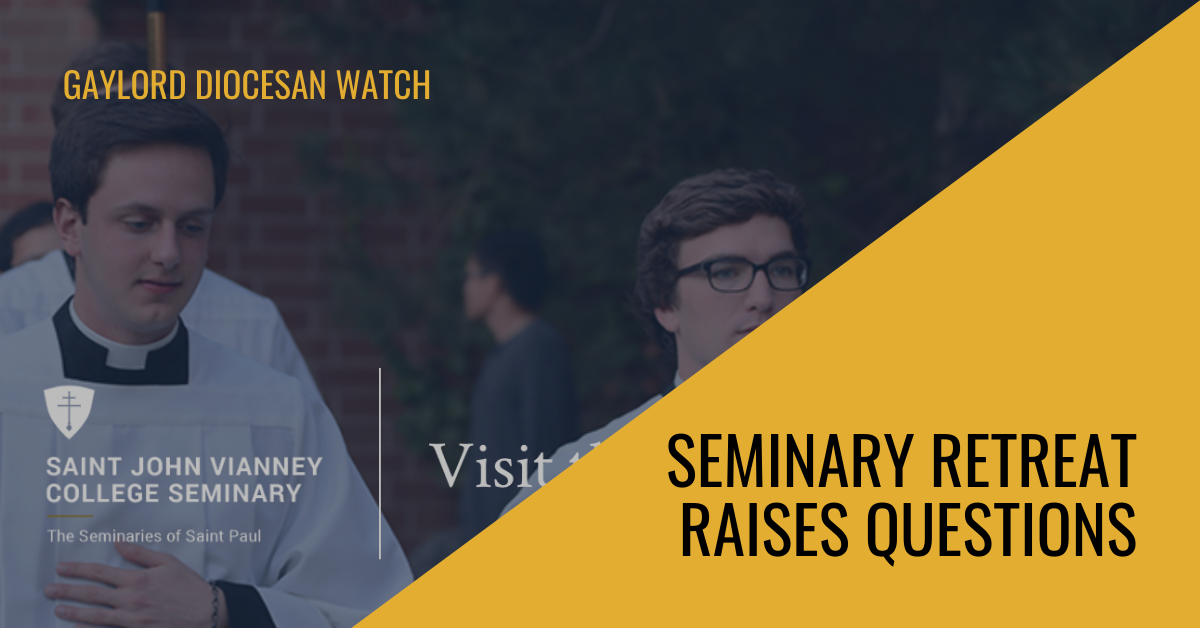 An upcoming retreat sponsored by the Diocese of Gaylord at Saint John Vianney (SJV) College Seminary, located in St. Paul, Minnesota, February 17 – 19, 2022, has raised questions among some faithful in the Diocese of Gaylord.  The retreat is aimed at 16-24 year old men who are discerning the priesthood.  Concerns were originally brought up when it was noted that Fr. Bryan Medlin was to be one of the chaperones for the retreat.  When the retreat was first announced, Fr. Medlin was the Assistant Vocations Director for the Diocese.  He was given that responsibility by the now notorious Bishop Walter Hurley, Administrator of the Diocese, whose penchant for shuttling bad priests from post to post is well known.  Last July, Fr. Medlin was abruptly moved from a parish with a school (after only 2 years of being there) to a rural parish with no school.  Last month, it was reported that Fr. Medlin is now under investigation by the Michigan State Police for inappropriate text messaging to minors.  He was removed from Cross in the Woods parish last month due to this revelation.  Father Medlin as been replaced as retreat chaperone by Fathers Mitchel Roman and Alex Kowalkowski, known by many in the Diocese as upstanding priests.

However, questions still remain with regard to this retreat.  Although sources tell us that St. John Vianney is a solidly Catholic and orthodox seminary, it is part of the University of St. Thomas system.  This system is a set of colleges whose Catholic identity is questionable and whose political leanings are of concern.

I earned a Master’s at St. Mary’s and have pursued specialized training in models of therapy that integrate the multi-faceted aspect of our humanity including thoughts, behavior, emotions and the body. I incorporate my training in these therapy models in my work with the seminarians.

I provide on-site therapy sessions for the seminarians. Sometimes being away from home and the transition to college is difficult. Strategies that were useful previously may no longer be effective. Often, we can “know better” but struggle to “do better” consistently when approaching the difficulty only at the level of thinking and doing. Through integrating all aspects of the human person, I enjoy helping the men heal from past hurts or struggles, gain freedom, cultivate joy, and work their way through difficult circumstances. I also meet with the priests [on staff] once a month to provide information about mental health issues and discuss the intersection between formation, spirituality and psychology.

While I am happily surprised at how effective psychotherapy can be virtually (online), sitting in a room together facilitates a deeper and more connected experience. Additionally, many barriers are removed with being on-site, including ease of scheduling and transportation. I’m just a walk down the hall. I think being on-site increases comfort level and overall makes the process of seeing a therapist less daunting.

Is this a seminary or a residential mental health facility?  If seminarians are needing this level of mental health support during their seminary training, are they really candidates for being priests?  Is the seminary making them mentally ill?

All seminarians should have been screened for mental illness prior to their acceptance into the seminary, and those who are mentally unfit should never be allowed to enroll or be ordained.  So why are we sending young adult males two states away for a retreat to a facility such as this?  Are those who planned this retreat aware of the conditions at the seminary?  Are there no other venues closer to the Diocese or in the Diocese to have a discernment retreat?  How about our current seminarians?  Why are none of them going to St. John Vianney seminary?  Why isn’t the retreat being held at the seminary they are attending?

The Diocese of Gaylord too often seems to raise more questions than they answer.