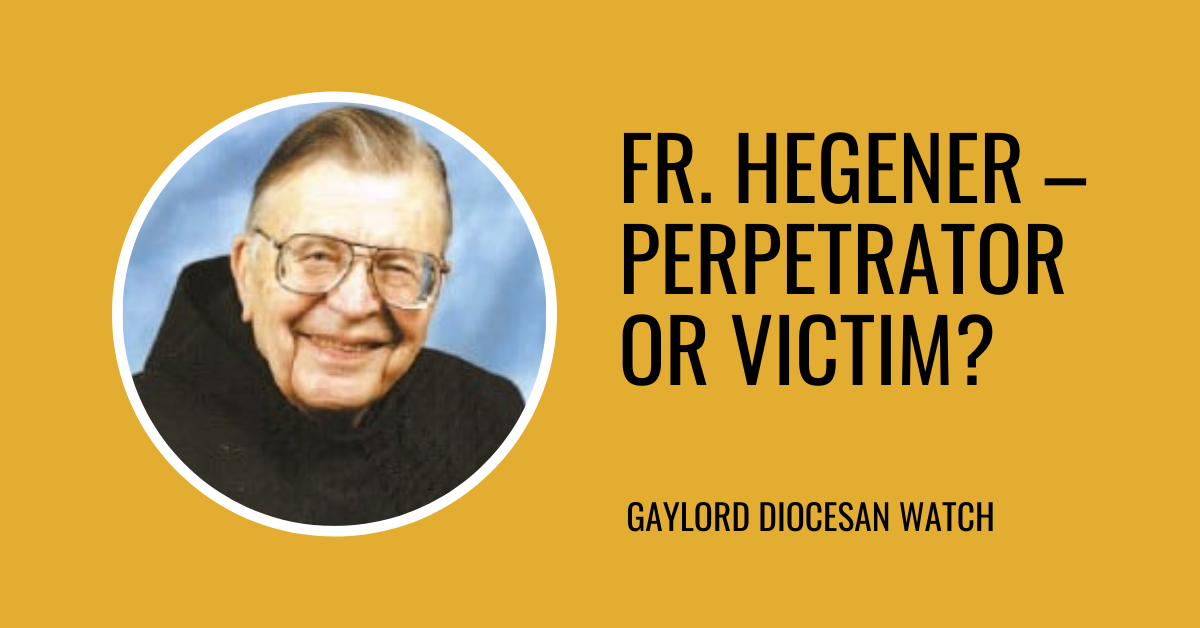 Fr. Wilbert Hegener was a Franciscan priest at St. Francis Xavier in Petoskey for 19 years in the 1980’s and 1990’s.  After his retirement from St. Francis, he remained in the area serving at Cross in the Woods parish, Indian River, before going to a Franciscan nursing home.

Fr. Hegener grew up in Petoskey.  He was known by many in the community.  Many Catholics in the Petoskey area knew Fr. Hegener for over 30 years.

It was therefore a shock for many in the area to have heard the news that Fr. Hegener was quietly placed on the list of credibly accused priests for sexual abuse of minors in the Diocese of Gaylord.  After Gaylord Diocesan Watch reported on this, we received feedback from concerned individuals who knew Fr. Hegener for a long time.  They do not believe the priest is guilty of misconduct.  Unfortunately, the Diocese did not include his name on the list of credibly accused until this year.  The listing gives no information on the accusation.  When a member of the Diocese asked the Diocese for information regarding the allegation, the Diocese responded with a typical non-informative response:

Though we cannot give specific information due to privacy, we can confirm that Fr. Wilbert Hegener, O.F.M., was placed on the list of credibly accused clergy due to an allegation of misconduct during his time serving in the Diocese of Gaylord. The allegation was received more recently, and it was found to be credible and substantiated. It is very common for victim-survivors of sexual abuse to disclose this many years after the abuse.

Since Fr. Hegener was a priest of the Franciscan Order, further questions may be directed to the Franciscan Province of the Sacred Heart in St. Louis, MO (314-353-7470).

So we have no information regarding any allegation except that there was one.  We don’t know anything regarding the substance of the allegation.  Was it one episode?  Were multiple individuals involved?  Were there other clergy involved in the misconduct?  Did anyone in the Diocesan bureaucracy know about it when it occurred but did not disclose this information?

Why is this important?  It is vital that the Diocese give accurate and thorough information regarding the misconduct of its priests and employees.  Over the years, the secrecy of the Diocese has caused many to question the veracity of the Diocese on a host of issues, including issues not simply related to sexual abuse.  Transparency (and we may add, Synodality,) leads to trust and confidence that the Diocese is doing the right thing.  This trust and confidence has been lost.  This loss is further confirmed when incidents such as this occur:  a well-known priest who many have respected is accused of heinous crimes.  He is not able to defend himself because he is dead.  Why not give the faithful the information?  If others were harmed, then possibly transparency and accountability would inspire others to come forward to help put closure to this priest’s misconduct.

On the other hand,  is the allegation really credible?  The clearing of allegations of sexual abuse by the disgraced Fr. Dennis Stilwell have caused many to question the decision-making process of the Diocese.  The refusal of the Diocese to release information regarding Fr. Hegener furthers this mistrust.