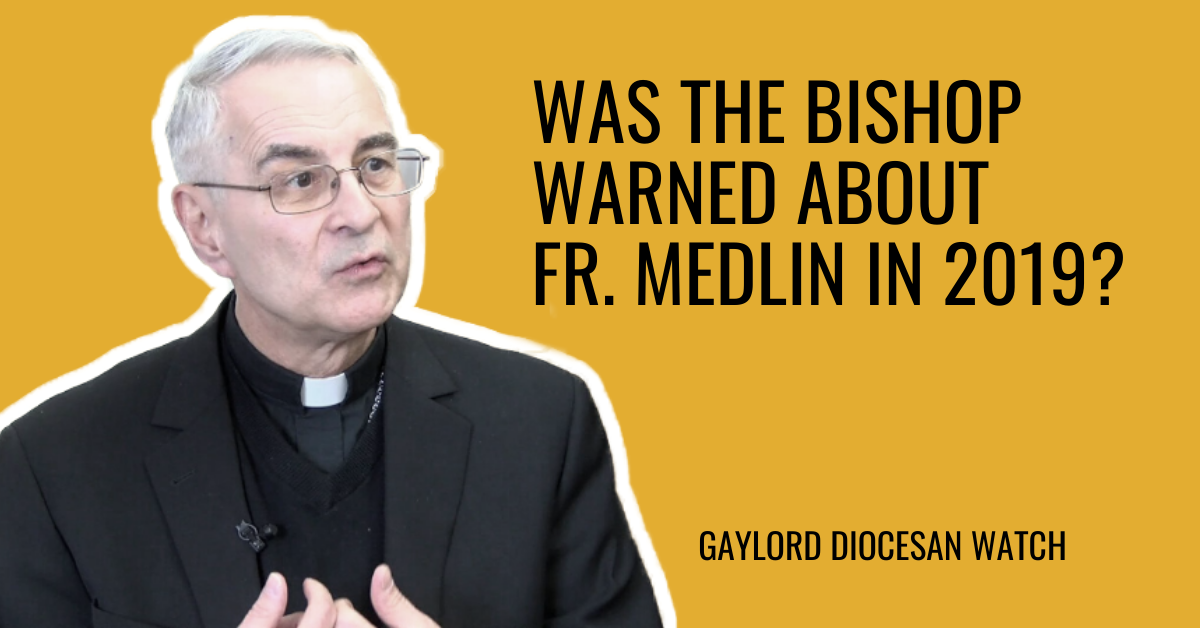 Father Bryan Medlin left his post as pastor of Cross in the Woods parish late last year after allegations surfaced that he was inappropriately texting high school students.  At the time of the texts, he was pastor at St. Mary Church and school in Lake Leelanau.  We reported this in a previous post.

Gaylord Diocesan Watch has obtained documentation of a letter that was purportedly sent to the Bishop Steven Raica in June of 2019.  According to our sources, a student sent this letter with the following concerns regarding Fr. Medlin.  We believe the sources of this information and the letter are credible. We have edited some of the words for the sake of propriety:

Father Bryan regularly uses profanity around students to their face or behind their backs. He calls students names and other things such as “Dumb*ss” and “F***er”. Those were just to name a few.

During science class, a mixed class of juniors and seniors were taking a test and one of the students had finished her test before the rest of the class. Father Bryan happened to be in the room at the time and said the following: “Just because you finish before everybody doesn’t mean you’re smart it could actually mean you’re just stupid.”

During the Senior’s last week of school one student who wishes to remain anonymous was wearing a hoodie because the seniors were exempt from dress code. Father Bryan walked to the student and said the following, “Wow (anonymous) you look like a real hoodlum I know because l’ve been to Detroit.” Father Bryan then got closer to the student and said this: “You know (anonymous) you should paint your face black and then you could be a real mother f***er'”.

Every year it is a tradition for seniors to hang up a class countdown until they are finished with school. When they first put up their countdown they had put up a picture of the actress Raini Rodriguez and jokingly I said that I had wanted the picture when they were done with it. After it was time to take it down they tried to throw it away. I had taken it from them and Father Bryan saw and then said the following “Oh [name of student] I hope you’re not having sexual relations with that piece of paper, that would make you a paper molester.” and from that day forward for a week he called me a “paper molester” whenever he happened to see me.

A classmate of mine who wished to remain anonymous has gone to confession with Father Bryan.
During lunch one day Father Bryan was walking around the cafeteria and came to our lunch table and
brought up one of the student’s confessions in front of everyone at the lunch table.

We have also received copies of the texts that were allegedly written by Fr. Medlin to students.  They are similar in tone to the above excerpts.  They are highly sexualized and perverse.

Because of this behavior, the suitability of Fr. Medlin as a Catholic priest is severely, if not completely, compromised.  Gaylord Diocesan Watch looks forward to offering our support and discussing Diocesan challenges with (the newly installed) Bishop Walsh.  Once Bishop Walsh is installed, Gaylord Diocesan Watch will be contacting the Chancery to set up an appointment with our new Bishop to discuss issues of concern to members of his flock.  We offer our congratulations and prayers for his successful upcoming leadership of this Diocese.