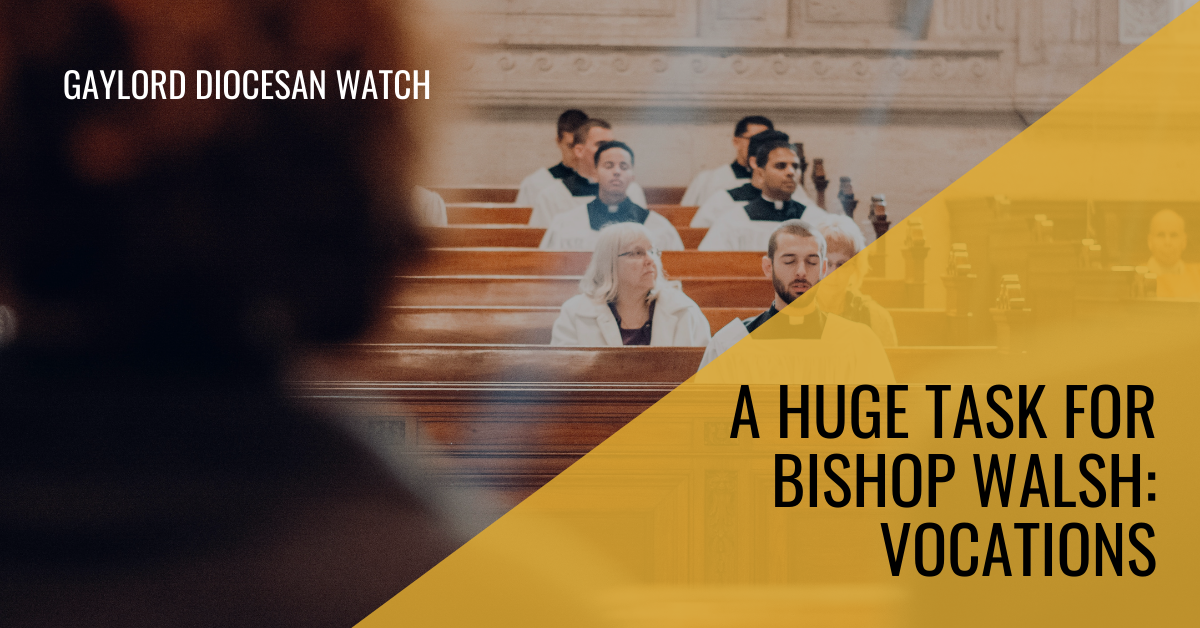 One of the most daunting challenges Bishop Walsh must encounter as the new Bishop for the Diocese of Gaylord is a lack of vocations. The vocations situation in the Diocese of Gaylord is abysmal.  As of now, it will be over 4 years before any of the current seminarians are able to be ordained. This is assuming that none of them will leave the seminary before now and their expected date of ordination. That may not be a safe assumption.

How have we gotten to this dismal situation? It is easy to blame the decline of morality in our culture, and it could play a major role, but vocations have flourished in societies where that has been the case. Digging deeper may offer some understanding.  Here are a few potential explanations:

Strong, independent, faithful young men are not welcome in many seminaries across the United States and the world. This has been highlighted in many writings and exposés of former seminarians. Unfortunately, it seems that all too often the men ordained these days are weak and malleable, poorly trained, and quickly learn to be “company men” who don’t rock the spiritually corrupt boat but keep their heads down to keep their jobs (should be vocations) afloat. Once a priest is ordained, it can be a short trip to the unemployment line if the priest dares to speak out against sin in the Church. Just look at the lack of discussion in this Diocese when Father Matthew Cowan outed the disgraced Fr. Dennis Stilwell’s inappropriate sexual advances toward him. Which priests publicly came to his defense? How many priests even showed up for his farewell party before his temporary transfer to the Diocese of Saline, Kansas? The answer is none. Which parent wants to foster a vocation to the priesthood for a strong orthodox young man if he will be treated the way Fr. Matthew Cowan was treated in this Diocese?

Who wants to serve under the wanting leadership of a Bishop Raica or Hurley? Who wants to be a Catholic priest with examples such as the disgraced Fr. Dennis Stilwell, the problematic Fr. Bryan Medlin, and the scandalous Fr. James Holtz? For other priests of the Diocese, where is the enthusiasm to say Mass, visit the homeless on a “day off” (which parent gets a day off from being a parent?), teach children or adults the tenets of the Catechism, offer Confessions more than on an inconvenient time Saturday afternoon, etc.? There are certainly exceptional priests in our Diocese who do all of these things and are wonderful examples, but there are also too many priests in the Diocese who seem to be stuck in a certain work ethic that doesn’t always involve appropriate sacrifice.

The state of the clergy in some ways represents the terrible state of seminary training. Priests are not trained to be the hard workers necessary to tend to a flock of needy parishioners. We have reported on one seminary having two full-time psychologists on staff of a major seminary to help the seminarians during their training. Why? Could it be that the wrong people are being chosen to be priests? What is being taught in the seminary? How many priests are well versed in public speaking, knowledge of the Latin language, and are at least minimally competent in reading music and playing a keyboard when they are ordained? What type of strict discipline is established in the seminaries? Seminary training should be as academically and spiritually rigorous as boot camp is physically for the Marines. Are there any seminaries that come close to this standard?  Unfortunately, we know the answers to these questions; so do those who may have a growing interest in the priesthood, only to be wiped out by a bad example priest or bishop.

What is the answer to this problem? Obviously, it’s the Holy Spirit working through faithful people to bring about a renewed interest in vocations. Often, it’s not words but example that draw a man to a vocation. This can only happen with faithful priests and bishops who put their full support in nurturing a genuine vocation. Let us pray that Bishop Walsh will set a holy example of what it means to be a shepherd AND offer the appropriate tools to gather men into the priesthood for the future of this Diocese.