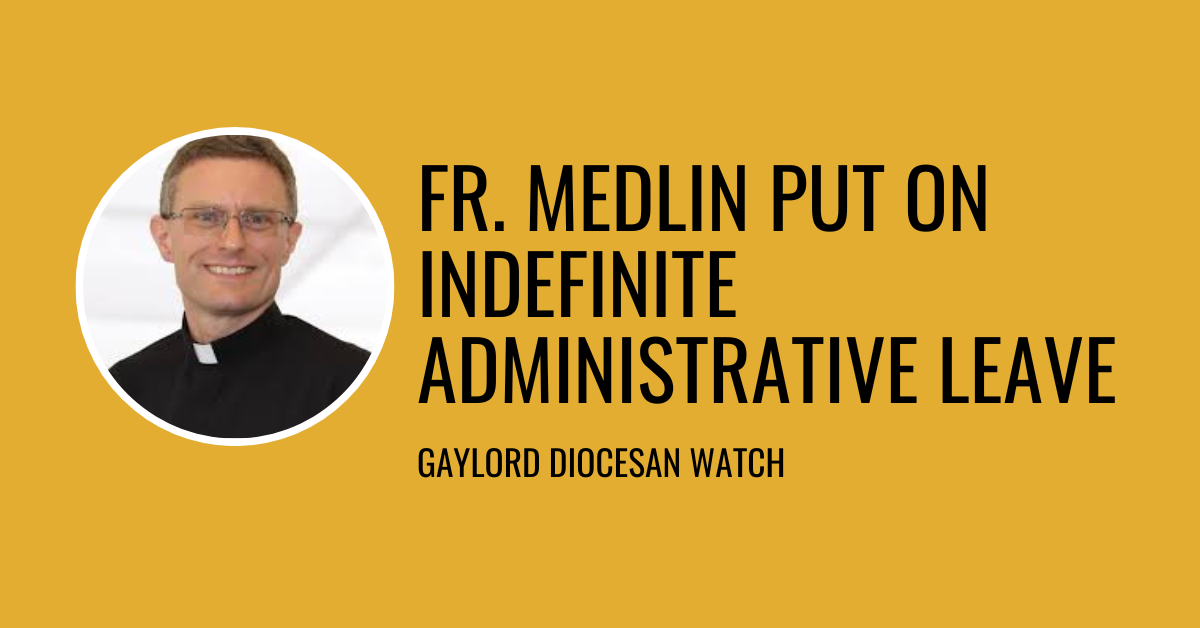 The Diocese of Gaylord announced the conclusion of an internal investigation regarding Father Bryan Medlin, a diocesan priest in the Diocese of Gaylord. The investigation revealed that Fr. Medlin had “violated the diocesan Safe Environment Policy, including its standards of conduct as set out in the Protocols for Ministry to Minors.” The announcement then stated that “As a result, Father Medlin will remain indefinitely on administrative leave with ongoing monitoring by the diocese, and he is prohibited from public ministry and presenting himself as a priest. In addition, there will be ongoing consideration of further canonical proceedings.”

Fr. Medlin was found to have sent a variety of obscene text messages to students regarding sexual activity/fornication. Other students have come forward to describe inappropriate language, often sexual in nature, coming from Fr. Medlin when he was Pastor at St. Mary Church and School in Lake Leelanau. Gaylord Diocesan Watch has covered this issue in detail here, here and here.

The Diocese noted in its announcement that “In late 2021, the Diocese of Gaylord became aware of electronic messages sent by Father Bryan Medlin to a small number of high school students that appeared to violate diocesan policies and protocols.” However, as documented by Gaylord Diocesan Watch, the Diocese was notified by students at St. Mary School in 2019 regarding inappropriate behavior by Fr. Medlin. This was during the leadership (or lack thereof) of Bishop Steven Raica.

Of note is that Fr. Medlin has not been laicized, and the announcement seems to leave open the possibility that he could return to active ministry in the Diocese. It is clear that Fr. Medlin cannot function as a Catholic priest, and to many faithful, his egregious violations of priestly character and the seriousness of his sinful actions make his return to ministry impossible without creating serious scandal. Please pray for his soul.