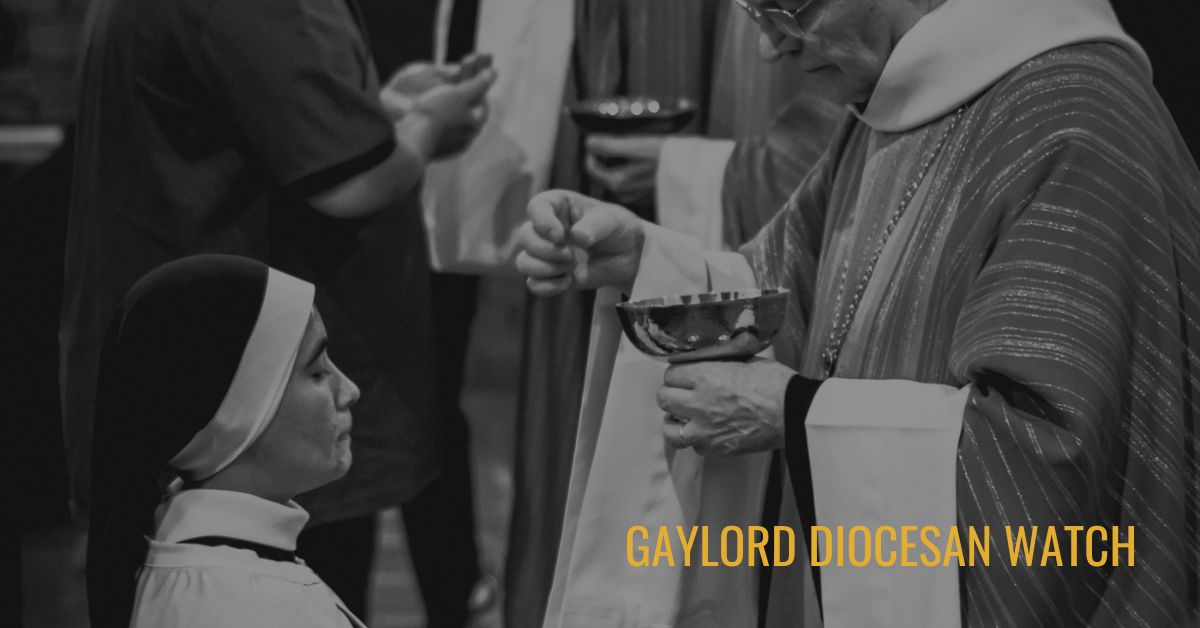 In the October 16, 2022 bulletin of St. Anne Church in Cadillac, Father Michael Janowski, pastor of St. Anne, wrote the following:

Our Bishop Jeffrey Walsh has made his priests aware of some important
expectations on his part for the celebrations of our liturgies, so that there
is a spirit of unity in our congregations. One of those expectations is the
posture of people standing during the reception of Holy Communion, not
kneeling. He has asked that we catechize our people on the proper
posture of receiving the Body and Blood of Christ. There are several
places in the liturgy where kneeling is the expected posture such as
during the Eucharistic Prayer and the Lamb of God. During the reception
of Holy Communion however, Bishop Walsh has asked for a common
posture of standing. Having said that however, if someone comes up to
receive the Body and Blood of Christ and desires to kneel, we will not
prevent you from doing that. Bishop Walsh has simply asked that his
pastors and priests do not place kneelers out which would confuse his
expectations for a common posture. I know many of our parishes do, as
we do at St. Stephen in Lake City. Out of respect for our bishop and his
expectations and under his authority, Fr. Nursey and I are going to follow
these expectations and no longer place kneelers out for Communion.
Bishop Walsh as the legitimate authority on liturgy in our diocese has the
right to establish liturgical protocol within the Mass within his diocese.
Therefore these changes will be implemented as soon as possible. These
expectations are for the whole of the diocese and all of our parishes,
again to promote a spirit of unity among the people of the Diocese of
Gaylord.

The directive by Bishop Walsh, purportedly for the sake of “unity”, hardly seems to be a unifying action.  Those who desire to kneel for Holy Communion are essentially told to back off and deal with added inconvenience instead of accommodating their preferences.  Would it not be more welcoming and inclusive to allow them a proper form of structure for kneeling?  They are now relegated to being lowered to the floor of the church.  This is contrary to the instruction given by the Congregation for Divine Worship and Discipline of the Sacraments:

This Congregation for Divine Worship and the Discipline of the Sacraments has received through official channels your letter dated 1 December 2002, related to the application of the norms approved by the Conference of Bishops of the United States of America, with the subsequent recognitio of this Congregation, as regards the question of the posture for receiving Holy Communion.

Indeed, the faithful should not be imposed upon nor accused of disobedience and of acting illicitly when they kneel to receive Holy Communion.

Aren’t we imposing on those who wish to kneel for Communion by making it inconvenient or impossible to do so?

Furthermore, if Bishop Walsh is concerned with unity, are there not more important breaches of unity such as when people are holding hands at Mass, using the Orans posture during various points of the Mass (which should be limited to the priest), and other innovations that happen in one parish and not in another?  How about the state of music in our liturgies or the lack of understanding of even the most basic tenets of the Catechism?

In an era when over 70% of people who identify as Catholic don’t even believe in the body, blood, soul, and divinity of Jesus Christ in the Eucharist, a person who kneels for Holy Communion could be an important example for those who may be confused as to the significance of the Sacrament of the Eucharist. Why not promote the practice instead of discouraging it?  In 2002, the Congregation for Divine Worship and Discipline of the Sacraments stated the following:

In fact, as His Eminence, Cardinal Joseph Ratzinger has recently emphasized, the practice of kneeling for Holy Communion has in its favor a centuries-old tradition, and it is a particularly expressive sign of adoration, completely appropriate in light of the true, real and substantial presence of Our Lord Jesus Christ under the consecrated species.

One of the reasons, among many, that Communion rails were placed is to allow a reasonable and practical structure for aiding in kneeling and getting up from a kneeling posture. Without a kneeler or similar structure, there is potentially a considerable liability risk if a parishioner were injured due to slipping while trying to kneel or getting up from a kneeling position without an appropriate structure with which to kneel.

Why create disunity with this directive?

If you disagree with this latest directive by Bishop Walsh, you can contact him: